Last blog post I talked about finishing planetfall book 1, and writing a synopsis prior to finding a literary agent. I covered my immediate feelings on finising the final edits – that the book will probably end up like thousands of others, lost in a slush pile or flat out rejected, and how that awakened a determination to fight for it.

In this blog I want to step back from the technical process of writing – character development, plot devices, and so on – and give a little insight into some of the materials I use for writing. Other writers may gain more from this than casual readers.

I normally start writing in long hand. That’s not to say I can’t write straight to laptop – I’ll come onto that in a later blogpost. After some experimentation, I’ve found the following work for me: 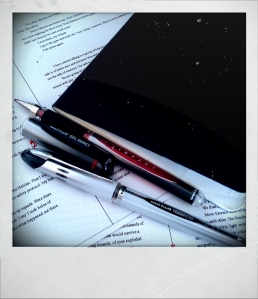 The Uniball gel pen took some finding. I used to write with biro, and of course if I’m caught without my writing materials and feel the need to scribble, I’ll still use one. When I discovered I preferred starting stories in long hand, I realised immediately that I’d need a comfortable pen to write with.

I have very messy handwriting, and I’ve always found biros too skinny and slippy for comfortable writing. The thin stick of the pen casing digs into the flesh between my thumb and forefinger. The small circumference makes it hard for me to keep a reliable grip. And the easy rolling of the biro’s ball makes slips across the page far too easy. I knew if I was going to manually write stories that I’d need to change this.

I don’t remember how I found the Uniball pens. I know I bought a couple of different pens from a local stationery shop, and chose them all for the thickness of the barrel. The ink-type and nib had no bearing on the decision. The gel ink of the Uniball stood out immediately. It feels to me (and this may not be real, just perceived) that the Uniball has better traction on paper, that there is some resistance. The ink also comes out in thicker lines, which helps to hide the drunk-spider scrawl that is my normal handwriting. The thicker barrel makes the pen easier to hold and more comfortable for a longer period of time. In short, it is a more satisfying writing experience.

Now, the Moleskines. You’ll all be rolling your eyes – so cliched, right? Well, yes, but then cliches come from somewhere, don’t they?

I bought a Moleskine due to a story I read about  a writer who could only write with Moleskines (read it here). I was fascinated. What were these notebooks? It was around this time that I discovered they’d gone out of production. A short while later there was a newspaper article – Moleskines were back in production. This was long before I was writing seriously, so I squirrelled the information away: at some point in my life, I would try one out.

When I started writing more seriously, and found that long hand was my preferred initial method of writing, I resolved to try them. To that point I’d been writing on A4 pads, top bound, flip up. I found them unsatisfactory. Now, I know some writers swear by them. They write with a pencil on A4 block. They write only on on side, using the block’s longer and broader expanse to give their hand room to roam & write and make notes. But I don’t write with pencils – for a start you have to keep sharpening them, which means carrying a pencil sharpener around. I would lose it quickly. And pencil fades and slips across the paper. No, not for me.

I tried, too, Uniball on A4 paper. While I liked the feel of the Uniball, I found the ink is too heavy and thick, and the paper too thin, so that you can see the writing on the other side of the page. I don’t write on one side of paper, it’s a waste of resources. And anyway, I was going to be out and about writing. I’d already decided that. There are too many distractions at home – TV, Wii, internet (internet!) – so I remove myself to cafes to write. Somewhere where there is nothing left but the page and the pen and what’s in my head. Carrying an A4 pad around would be too bulky and awkward.

It was on a trip up the Lea Valley (north east from Greater London) when I was volunteering with Friends of the Earth that I spied a pack of 3 Moleskine notebooks in Liverpool Street Station’s W H Smith. I bought them, put them away, went and did my volunteering (for the Climate Change Act, as it became), came back to London after a pint and my first ever pickled egg, and put them away. And promptly forgot about them. It was over six months later, in January 2008, when I decided to go on a writing break to the Isle of Skye that I dug them out.

Their covers are made of a rough, black card-like paper, so they look a little mysterious, like they could contain anything: diaries, stories, poems, sketches of sweethearts and brawling drunks. They have rounded corners which don’t get caught in things. The paper is thicker and yellower then A4 pads. The Uniball gel ink clings to the paper and draws the pen across its surface. They are a construction made for writing. 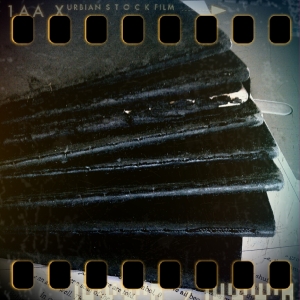 I have since filled 7 notebooks with notes and storyboards and thoughts and plans for planetfall and a couple of other short stories (Ayla’s Journey, First Things First, The Boy). The picture above shows the 7 filled notebooks and the current 8th, and the picture below shows the first page from the first Moleskine I ever used, including my first attempt at story boarding. 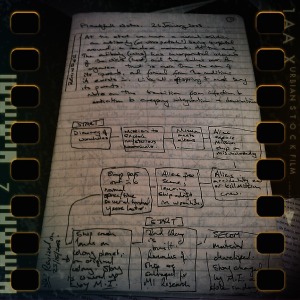 The first page of the first Moleskine notebook, plus my first ever story board

I now carry my notebook and pen with me pretty much all the time. There is always time to scribble something down, even if it’s a word, a short sentence, or just looking at what I’ve written, or the story board to fix the narrative in my mind.

When I write in the notebooks I record the date, time and place. Although it is not meant to be a diary, it gives me, of course, a reminder of where I was at particular times. Sometimes leafing through past notebooks makes me wonder why I was free at 14:52 on a Tuesday, rather than at work. In that sense it records some of the context of my life as I was creating this other place, this other world, these other people, these other events.

So there we have it. Uniball gel pen, Moleskine notebook. That’s how it all starts. Next time, a little something, I think, on transferring the writing to the laptop and how I go about editing the work.